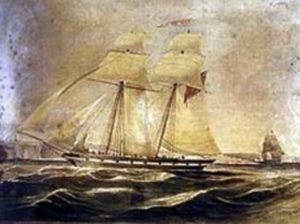 Horseshoe Bay was proclaimed a port in 1851, and the settlement above the bay was named Port Elliot in 1852 after Charles Elliot, the Government Bermuda, who was a friend of the then Governor or South Australia, Sir Henry Young.

The aboriginal name for the area may have been “Witengangool”.

The township of Port Elliot

While we as a lifesaving club have been around for a significant 80 years, it needs to be said that lifesaving and Port Elliot go far further back and this link with our history sits at the heart of all that we do within lifesaving today. In the year 1860, Port Elliot saw what could well have been the first act of heroism and lifesaving in the actions of Agen Dent.

Only four years earlier, Port Elliot had been declared a safe harbour and was to be a key docking point for the loading of commodities brought down the River Murray by steamer and then across from Goowla by train.

Tall ships were moored throughout the bay and sought shelter behind the 10,000 pound, government funded construction that was the man made breakwater.

This small projection of rocks however proved to be inadequate and over its time as a harbour several ships were lost, the most notable being that of the Flying Fish. On an unseasonal December afternoon the Flying Fish was washed towards the northern beach and rocks of Horseshoe Bay. With nine people still on board, all were at grave risk of death if the ship could not be steadied.

With a population of only approximately 250 people it took no time for word to get around and a crowd was building to watch the disaster unfold. Agen Dent was among these people, but unlike a large majority of the Victorian Era settlers, Agen had been instructed well in the little known act of swimming. Taught by local Raminjeri people, Agen was more than a competent swimmer and took to the task of saving the nine, if not the ship.

With one end of a piece of fine fishing line tied around his waist, he set off to the failing vessel. With the other end securely tied to a heavy rope, Agen Dent reached the wooden two master, tied off the line and with the heavy rope secured, rescued all nine of those on board. Some in the crowd that had gathered to watch the event were heard to audibly gasp at this daring retrieval. And so the culture of lifesaving in Port Elliot was instilled. Many years would pass before official lifesaving services would be provided on the south coast and over that

time, many more people would find themselves in trouble at the mercy of the sea and rescue attempts were made. Some successful, and some not so.

Established in 1933 as Port Elliot Life Saving Club and being originally affiliated Royal Life Saving, our members were heavily focused on the protection of bathers in and around picturesque Horseshoe Bay. With an emphasis on drill work and system-based precision, life saving involved use of the era’s best rescue devices such as Rescue Belt and Reel to retrieve a bather seen to be in difficulty, then if necessary performing the accepted method of resuscitation or ‘re-animation’ in order to bring a patient back to life.

As time went by, improved techniques in both areas of lifesaving took place with improvements such as the formalization in use of life saving dinghy rowing and the resuscitation device ‘The Eve Rocker’.

In 1942 Port Elliot members’ reputation as being experts in rough water incidents even saw us called in to effect a rescue at Rapid Bay, when a BHP ship bottomed out, trapping its sole remaining crewman. Even with a 45 minute drive over rough ground, it was still seen to be the best chance of a successful outcome to have 2 of Port Elliot’s Rescue Dinghy Rowers carry out the daring recovery.

With Joe Sibly rowing and Cliff Barton at the helm on lookout, the two progressed out through the looming surf to the stricken ship, on more than one occasion, taking water on to get to the awaiting crewman. Cresting the last wave, they finally reached the hard steel wall of the ship and once they had secured the lone crewman, they turned and hastily made their way back to shore, only to be swamped as they got to within a safe wading distance of the beach. Bystanders were in awe and BHP were so grateful, they donated a handsome 10 pound reward to the club, with which they purchased their first dedicated surf rescue dinghy.

With the second world war ending in 1945, it could be said that Royal Life Saving had lost its shine. Once a beacon of regiment, drill work and systems, these very strengths were the very same things that were seen as unnecessary, burdensome and even at times dangerous throughout the war. The relevance behind these traditions was questioned, examined and shunned by those that were once loyal life savers and Port Elliot LSC was wound up in 1952.

This was a brief hiatus with a fresh new approach being seen within Surf Life Saving Australia being adopted and in the summer of 1952/53 Port Elliot SLSC became an incorporated body, affiliated with the national organisation.

Bathing was being replaced with Surf Bathing and while there was still some public resistance to the notion, Surf Life Saving was becoming a vital part of most coastal towns’ infrastructure. With a safe swimming area, more tourists came to our beach and more money was spent at local businesses. As more people came, more lifesaving services were needed.

PESLSC grew, technologies improved and surf life saving became a path for a wider variety of people. Rescue Dinghies were replaced by Surf Rowing Boats and these had a rescue reel installed within them for effecting rescues further away from a base than ever. Surf Boats also played an integral part in the PESLSC culture with it becoming our main direction for competition, thanks to a gift given in mateship by an interstate club.

A chance meeting between a PESLSC member and a member of the Woolongong City SLSC, in 1954, at a national competition, we were given our first surf rowing boat. It was delivered to our club by several WSLSC members and even today, 60 years down the track we continue to be friends in Surf with a relationship that sees us almost more like family. Hospitality and friendly competition between our two clubs are ceaseless and are unseen anywhere else in Surf.

In 1960, in a fitting tribute to our heritage, 100 years to the day that saw Agen Dent swimming to save the crew of the Flying Fish, it was Agen Dent’s grandson who christened our first surf boat ‘The Flying Fish 1’. Since then we’ve purchased and run more than 12 of these boats and while they are no longer a part of our rescue stable, they are still part of our competition and Port Elliot crews are recognized as some of the best. While wooden surf boats have been replaced with glass and carbon fibre, we still have our eye on tradition. Our restored ‘Flying Fish 4’ is spectacular, and holds all of the same craftsmanship and romance that the wooden ships of old used to hold.

PESLSC saw its first Jet Rescue Boat in 1968, and in 1974 Port Elliot had become the only SA club to purchase its own JRB, which saw a new arm being added to our rescue capabilities, with our drivers gaining respect and recognition in a whole new field of life saving. As some of Australia’s finest JRB drivers, our members were even sought to provide water cover at interstate carnivals on more than one occasion.

Jump forward to present day, and Jet Skis, Inflatable boats, Helicopters and even unmanned drones make up a significant part of the state and national life saving service, but the real workhorse of every surf club is the humble active life saver. At our club, we have grown to around 150 active patrolling members who keep their eyes firmly locked on beaches every weekend between October and April.

And in true Surf Life Saving style, we have evolved to being much more than just a club for lifesavers. Port Elliot prides itself on its family friendly atmosphere and culture of mateship. With over 500 members, there’s something in lifesaving for nearly everyone. Weekly training sessions see over 200 kids involved in learning how to swim, surf safety skills, and progressing towards being senior life savers. Programs such as Same Wave, Vacswim, Open Water Swimming and important activities like introducing new refugees to Australian beach culture all play a part in the services Port Elliot SLSC provides.

And all of this is on top of the core service we strive to deliver. A rescue and life saving service, in and out of patrol hours. If it’s got anything to do with the beach we’re into it. Check out all that we get involved in, by looking through the rest of our website and contact us if you’re looking for more information on what we can do for you. There’s a place for everyone in Surf Life Saving and here at Port Elliot, with our belief in volunteerism and serving the community, we’ll find a spot for you to pursue your passion.

There are no upcoming events at this time.

Please note that our phone number is not monitored as it is located at our Club Rooms.

The best method of contact is via email & one of our volunteers will get back to you. Please note at this time we are unable to assist with enquiries re bookings for functions.